Other parameters, most often used for transistors at low frequencies and low power, are designated by the symbol r because they are all homogeneous resistors and their values are expressed in Ω or kΩ.

or called hfb. They are designated by the symbols re, rb and rc because they respectively represent the values of the internal resistances of the transistor for the emitter, the base and the collector. Since a separation of the three internal resistances is not physically possible, but only theoretically, it is understood that these parameters can not be measured in practice as was done for the parameters h ; we can only calculate their value starting, for example, from the parameters h.

One of the advantages of the r parameters is to allow simpler formulas to be obtained when designing amplifiers and circuits in general.

Sometimes, in the manufacturer's manuals, only the values of the parameters r and the coefficient hfb or

, are indicated, while it may be interesting to know the values of the parameters h relating to the common base and common transmitter assembly.

For the common base assembly, we have :

For the common transmitter assembly, we have :

The parameters r are obtained from the parameters h relating to the common transmitter assembly by the following relations :

Finally, one can search the hc parameters relative to the common collector assembly. They are easily calculated from the parameters he using the following formulas :

It should be noted that in this arrangement where the voltage gain is substantially equal to 1, the reaction coefficient hrc is also almost equal to 1 and this independently of the other parameters.

To conclude, Figure 9 shows the curves that give the parameters of the transistor at low frequencies and low signals (low power) type BC 108, depending on the collector current and for two values of the collector voltage (VCE = 5 V and VCE = 10 V). 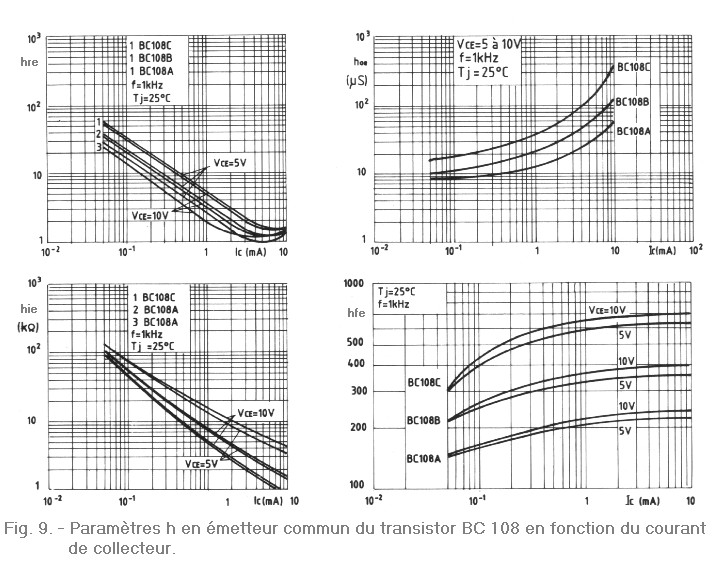 The four parameters seen above are not sufficient to precisely determine the characteristics of a transistor intended to operate at high frequencies. Indeed, for such types of transistors, it is no longer possible to neglect the capacity of the junctions which, although relatively low values, have at low frequencies quite low impedances. This impedance can have a significant influence on the input and output resistors of the transistor.

In addition to the parameters that are valid at low frequencies, it is necessary to take into account the junction capacities, that is, the input and output capacities, which brings to six the total number of parameters.

In the case of the common transmitter arrangement, the input capacitance also coincides with the capacity of the transmitter-base junction while the output capacity, which is more complex, is due to the other two junctions.

The input and output impedances of the transistor are therefore given by the paralleling of a resistor r and the reactance presented by the capacitor C at the operating frequency considered.

Since these two elements are in parallel, it is necessary to consider the admittances rather than the impedances so as to simply perform the sum of the conductance g = 1 / r, due to the resistive component and the susceptance b = 2 x n x f x C of the capacitive component.

Generally therefore, instead of giving the admittance Y, the constructor indicates the values of the components g and b for different frequencies. We report b on the vertical axis and g on the horizontal axis of a diagram in which each point corresponds to a determined value of the frequency. An example of a diagram relating to the transistor BF 195, used in the high frequency and intermediate frequency circuits of the radio receivers, is given in Figure 11. 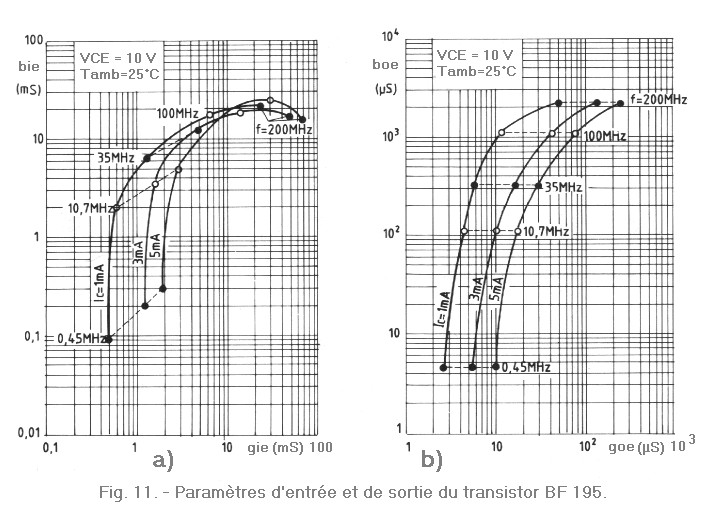 With regard to the amplification and reaction coefficients, they are here defined as the ratio between the variations of the collector (or base) current and those of the base (or collector) voltage ; they are also admittances.

The amplification coefficient Yfe is given by the ratio between the

IC variation of the collector current and the variation

On the other hand, the reaction coefficient Yre is defined as the ratio of the variation of the basic current

IB and the variation of the collector voltage which causes it, namely :

This coefficient is generally expressed in µS (microsiemens), that is to say the ratio between µA and V.

Since the variations of the current and the voltage are not in phase (because of the internal capacitances of the transistor), it is necessary to specify this phase shift which we call

fe will correspond to the parameter Yfe and an angle

re will correspond to the parameter Yre.

The values of Yfe,

re vary with the frequency ; they are therefore obtained from graphs such as those of Figure 12-b and Figure 12-a. 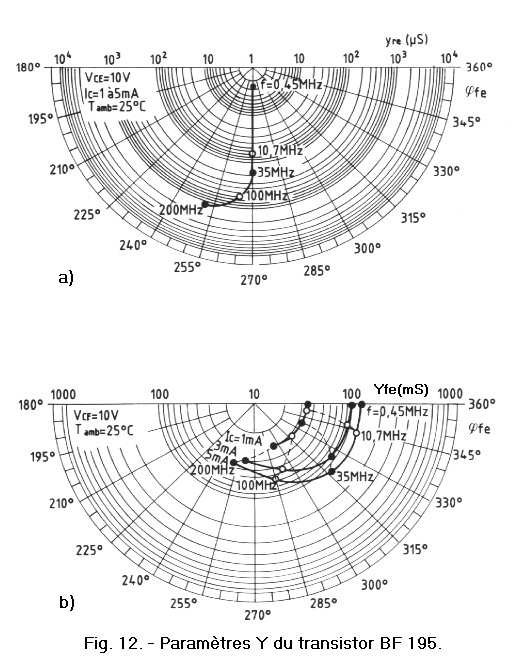 In these polar coordinates, the values of

fe are read from the angular value indicated on the circumference and the modulus of Y on one of the radii.

Finally, it should be noted that these parameters called parameters Y (since Y is the symbol of the admittance) also depend on the collector current of the transistor ; it is therefore necessary to have different curves, each of them corresponding to a given value of IC.

By way of example, if it is desired to know the parameters Y of the transistor BF 195 when it operates with a collector current of 1 mA at the frequency of 10.7 MHz, it suffices to consider on the various graphs the Figure 11 and Figure 12 the points indicated by 10.7 MHz on the curves marked by 1 mA.

The following values are thus obtained :

These parameters are used for the calculation of the gain and the impedances of input and output of the amplifiers HF as well as for the verification of their stability.

The next lesson of Semiconductors N° 7 will deal with various semiconductors such as uni-junction transistors, thyristors, diac and triac. Then we will begin the new digital electronics lessons without forgetting PRACTICE.

Click here for the next lesson or in the summary provided for this purpose.


Send an email to Corporate Webmaster for any questions or comments about this Web Site.