In a circuit traversed by a direct current, the power P that it dissipates is expressed by the relation : P = V x I.

To determine the power in a circuit, three cases must be considered.

This is the case of a purely resistive circuit. The voltage and current have the appearance shown in Figure 6-a.

To obtain the curve representative of the power (Figure 6-b), it suffices to multiply point by point the value of the voltage (v) by that of the intensity i.

This curve is a sinusoid located entirely above the abscissa axis since the product (vi) is always positive. On the other hand, the frequency of this sinusoid is twice that of (v) or of i.

The average value (P) of the power considered corresponds to half of Pmax, namely :

This relation is identical to that obtained in the case of a direct current.

Since the power involved in the resistive circuit can be used to produce a job, it is called active power. It is measured in watts and is indicated by the symbol P.

Consider the case of pure inductance.

The voltage (v) is in advance of 90° with respect to the intensity (i) as represented in Figure 7-a.

As in the previous case, it is sufficient to multiply at each instant the voltage (v) by the intensity (i) to obtain the curve representative of the power P (Figure 7-b).

We note that the resulting sinusoid is the same as that of Figure 6-b, but this time it is centered on the x-axis. Indeed, in the first quarter of period, the tension as the intensity are positive ; the power is so too. In the second quarter of the period, the intensity remains positive, but the voltage becomes negative, the power is therefore negative. A similar analysis can be done for the third and fourth quarters of the period.

This seems contradictory to the principle that a generator supplies energy to the receiver circuit connected to it.

We know that for a resistive circuit, the energy consumed is transformed and dissipated in the form of heat.

In the case of a purely inductive circuit, the energy supplied by the generator is stored in the magnetic field created by the inductor when the current increases.

This magnetic field dissipates when the current decreases and the previously supplied energy is returned to the generator.

The power involved in a purely inductive circuit being zero, it produces no work. It's called reactive power. It is denoted by the symbol Q (Pr is also found) and is measured in reactive amperes (VAR).

2. 3. - THIRD CASE : VOLTAGE AND CURRENT ARE PUNCHED FROM AN ANGLE

This is the most general case.

To find the active power P absorbed by the circuit, let's decompose the vector I into two vectors : the first IA in phase with the voltage V and the second IQ phase-shifted by 90° as shown in Figure 8-b.

One can imagine that the circuit is traversed by two distinct currents (IA and IQ) out of phase with each other by 90°.

The current IQ is 90° out of phase with the voltage V. This current IQ does not perform any useful work. It only determines an alternating exchange of energy between the generator and the circuit.

It is only the current IA in phase with the voltage V which produces a useful work.

The product of the voltage V by the current I therefore represents an apparent power absorbed by the inductive and resistive circuit. Only part of this apparent power, denoted S, is used by the circuit in providing useful work.

This apparent power (S) is expressed in volts amperes (VA).

The three powers (active, reactive and apparent) are linked by a relation that can be deduced from Figure 9.

These three vectors representing the three powers form a right triangle. The hypotenuse represents the apparent power S and both sides represent the active power P and the reactive power Q.

represents the fraction (less than 1) of the apparent power (S) actually used by the circuit.

is called circuit power factor and is expressed by the relation :

We can also express these powers in another form. We have seen that the apparent power is the product of the voltage V by the current I. We can therefore write :

We can then enter this value in the power triangle (Figure 10).

We have just seen that the active power P is given by the relation :

By replacing S with its value VI, we obtain 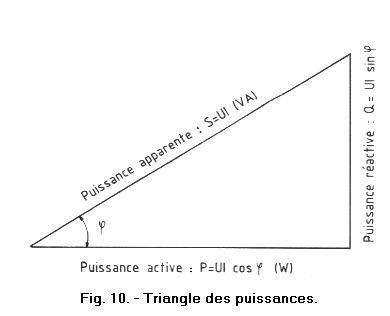 On the other hand, the reactive power Q is given to us by the relation :

Send an email to Corporate Webmaster for any questions or comments about this Web Site.